Whilst in the process of writing a couple of other articles, a rather hostile debate broke out on Twitter, last night, on the controversial issue of legalising cannabis.

My personal views are somewhat mixed. Whilst I personally cannot abide the substance and would never care to even try it, that does not mean that I am against the legalisation of cannabis.

In fact, there are actually some very good reasons for legalisation, just as there are also some strong arguments against. Nevertheless, when pointing out the negatives last night, I received a number of responses from the ever-so-lovely fellow tweeters. Here are just a few examples: 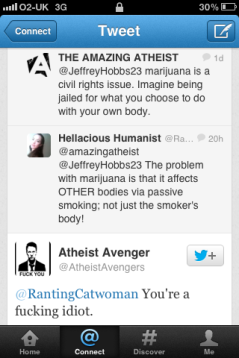 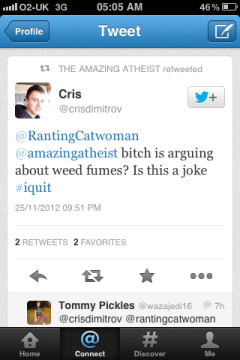 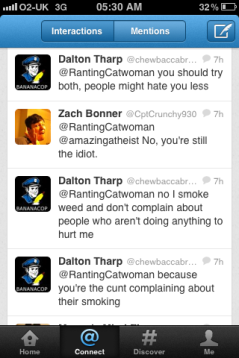 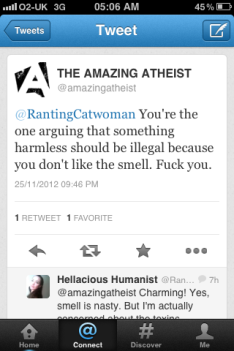 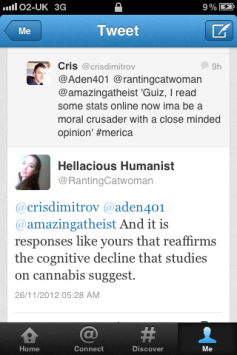 As I dared to debate the potential problems that legalisation might present, I was subsequently blocked by TJ Kincaid @amazingatheist, for not sharing his views 100%. This was despite my stating that cannabis should be legalised, but felt that a very carefully drafted legislation, and tight regulation, should be construed.

There are certainly reasons for legalisation. For example, a study published in the UK medical journal, The Lancet, ranked cannabis as one of the least harmful drugs. Yet, many cannabis users are actually risking their health, and others via passive smoking, by consuming cannabis that is of uncontrolled and doubtful purity. For example, the ‘Talk To Frank’ website states that Cannabis may be ‘cut’ with other substances to increase the weight and the dealer’s profits, with laboratory-confirmed reports of impurities such as glass and pesticides being found in herbal forms of cannabis; and with hash/resin frequently being mixed with a range of substances to increase weight. The site also reports of a 2010 study on contaminants found in drugs, which reported that there were cases of cannabis being adulterated with henna, lead and aluminum. By legalising cannabis, regulatory measures can be taken to control the quality of the substance. Not to mention that with the substance currently being illegal, the Government receives no revenue, and criminals are making all the profits.

Furthermore, people who use cannabis for genuine medicinal purposes are criminalised and somewhat alienated for using it, and are prohibited from a beneficial medicine for a serious condition. No important long-term research can be conducted on the therapeutic uses of cannabis, because of its current illegality in Britain. As a result, police time is wasted, the courts are backlogged with multiple cases, whilst the prisons are overcrowded.

As for the benefits of the drug itself, the plant contains more than 400 chemicals, including cannabidiolic acid, an antibiotic with similar properties to penicillin. The different chemical derivatives of the plant can be used for medicinal or recreational purposes, and is reported to acts as a mild sedative, leaving most people feeling relaxed or sleepy. By contrast, it is also claimed to make some more animated, and is also reported to release inhibitions. Wide-scale trials testing the safety and efficacy of cannabis extracts (or synthetic forms of them) are currently underway, and so far there has been interest in the use of cannabinoids in nausea and vomiting, appetite, control of cancer symptoms, pain, anxiety and muscle spasticity. Cannabis appears to be able to help reduce the side effects of chemotherapy treatment, although not more so than other already established medications. Some cannabinoids have been reported to relieve nausea during cancer treatment, allowing patients to eat and live normally. There have also been reports of cannabinoids having a protective effect against cancer in mice.

However, one myth about cannabis is that it is safe, because it is natural. Despite the suggested benefits, a survey of 1,000 adults conducted by The British Lung Foundation, found that one third wrongly believed cannabis did not harm health, and 88% incorrectly thought tobacco cigarettes were more harmful than cannabis. The NHS news website highlights that many of the same cancer-causing compounds in cigarettes are also present in cannabis, and reports on one study suggestion that over the course of a year, smoking a single joint each day could result in the same level of lung damage as smoking 20 cigarettes per day over the same period.

Indeed, studies have found a significantly higher accident culpability risk of drivers using cannabis, and chronic inflammatory and precancerous changes demonstrated in the airways of cannabis smokers, and a case-control study showed an increased risk of airways cancer that is proportional to the amount of cannabis use.

Furthermore, a study conducted at University of Toronto, on the adverse effects of cannabis on health found a causal role of acute cannabis intoxication in motor vehicle and other accidents with the presence of tetrahydrocannabinol (THC) in cannabis, in the blood of injured drivers in the absence of alcohol or other drugs.

Several different studies indicate a link between cannabis use and schizophrenia. The adverse effect of cannabis use on the clinical course of schizophrenia has been confirmed in a 3-year follow-up study of psychotic and non-psychotic subjects in the Netherlands. Those who were using cannabis at the start of the 3-year period were more likely to have some psychotic symptoms, and especially to have severe symptoms, at follow-up. Both this, and a second study, revealed that those who had psychotic symptoms at the start of the study showed a more severe adverse effect of cannabis use than those who were non-psychotic at the start. Studies reveal that cannabis can also cause serious relapse in people with schizophrenia. 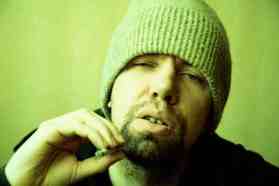 Furthermore, a significant link between cannabis and depression has also been found in various cohort studies, with a large-scale case-control study in New Zealand found a significant link between heavy cannabis use and serious attempts at suicide. A Canadian study found in a representative sample of over 1800 Quebec adolescents, that over one third had used cannabis and other illicit drugs more than five times, and encountered a variety of interpersonal problems related to their drug use. Cannabis has been shown to cause feelings of anxiety, suspicion, panic, and paranoia.

Another study has linked cannabis to testicular cancer, whilst cannabis has also been found to cause cognitive decline. A growing body of evidence indicates subtle but apparently permanent effects on memory, information processing, and executive functions, in the offspring of women who used cannabis during pregnancy. In total, the evidence indicates that regular heavy use of cannabis carries significant risks for the individual user and for the health care system.

Whilst recognising that there are limitations to the current evidence, the Canadian Cancer Society believes there is enough research to suggest an increased risk of cancer associated with long-term smoking of marijuana and being exposed to second-hand marijuana smoke. They suggest that cannabis smoke contains as many as 50 of the same carcinogens as tobacco smoke, and also state that there is scientific evidence that smoking marijuana may be associated with increased abnormalities in some of the cells in the body, including precancerous changes in the lungs. Might it, thus, not be wise that more research be conducted to better understand the cancer risks associated with long-term recreational smoking of cannabis and of exposure to second-hand cannabis smoke (not to mention the added risks of third-hand smoke), before ultimately deciding to legalise it? There are also studies which contradict such health risks, and the question is, which “evidence” should we believe?

My personal experience is that even walking a few centimetres behind a person smoking cannabis outdoors is sufficient to give me symptoms 20 minutes later, such as nausea, alteration of taste, insomnia, and brain fog. This would certainly tie in with the findings of scientific research.

However, despite the scientific findings that suggest cannabis is a harmful drug, none of the cannabis research carried out over the past 50 years has been conclusive. Although tobacco also affects the lungs, the law does not criminalise those who smoke, and it is not illegal to smoke outside of an enclosed public area. However, taking the possible health risks into consideration, combined with the risks of passive smoking, there is all the more reason to tightly legislate where the drug can be smoked. As free individuals we, of course, should all have the autonomy to put whatever substances we wish into our own bodies. However, it is unfair to inflict our potentially risky lifestyle choices upon others, via passive smoking. There is also the issue of burden upon the health service, which in the UK, is already under strain from lack of funding, the burden of the British binge drinking culture, obesity adding to the number of diabetes, cancer, and heart disease cases, and from people generally living longer and presenting an array of old-age related illnesses. Furthermore, there is the possibility of serious consequences arising from mixing cannabis with alcohol, which reinforces the requirement that we need a very tight legislation if the drug were to be legalised

I appreciate that cigarettes, alcohol, and pollution from vehicles are all toxic and can potentially cause much harm, but to use that as an excuse to add to pollution and health risks, is a very weak argument, and does not reinforce why a person has the right to selfishly inflict their smoke upon others, who may be suffering from chronic chest complaints. UK legislation makes smoking in a public place an offence under Section 1 of The Health Act 2006. However, it does not apply to outdoors, which means smoke is often a problem for people walking behind someone on the High Street, or standing at a bus stop, or living in a flat next to a smoker, etc., which could also be a problem if cannabis were legalized. A wise legislative solution might be to enforce that users only smoke the drug within the confines of their own private detached house, or at a special designated “Marijuana Bar”, where it will not impact the health of others who do not wish to have second hand cannabis smoke inflicted upon them without their consent.

On the grounds of legalising cannabis for its health benefits, it would surely be more prudent to administer a cannabinoid based medicine derived from the cannabis sativa plant, such as that which came into use in the UK in 2010 for people with MS, rather than administering the recreational cannabis that causes euphoria. Less than 3% of those in trials for the derived drug said it changed their mood. As a botanical product, it is difficult to test for efficacy and safety of the natural product, as the proportions of active chemicals can range greatly from plant to plant.

What is particularly interesting is that pro-cannabis advocates all claim that cannabis has the ability to “calm” a person. Therefore, I question why cannabis users are so hostile and aggressive in their method of debate, if the drug has such a calming affect? Surely such aggressive language and manner, similar to that on Twitter, goes someway in reinforcing the studies that suggest the drug causes permanent psychological problems such as anxiety, perception, paranoia, and hostility – not to mention mental illnesses.

It is also interesting that the pro-cannabis advocates, including TJ Kincaid, failed to note that I was not saying that the cannabis should not be legalised, but was merely pointing out the issues legalisation could potentially cause. Consider the studies that suggest how the effects of cannabis can interfere with a person’s attention, judgement, and thinking, and perhaps this suggests the reason as to why.

Alas, such hostility in the pro-cannabis advocates’ method of debate, is surely not the way to convince government officials of the drugs supposed benefits. Conversely, it might even go some way into convincing officials that the studies suggesting the drug’s adverse effects on the brain are accurate after all.