The results of new research reported in the news headlines today, suggests children are now reading less than they did back in 2005.

According to a study of 21,000 children and teenagers conducted by the National Literacy Trust, today’s generation of children read fewer novels, comics, magazines and websites. While many enjoyed reading, it is reported that 17% said they would be embarrassed if a friend saw them with a book.

The results of this research reminded me of two previous posts that I wrote for this blog, only a matter of days ago:

Have English Standards Taken A Nosedive?

A Government review of British education, in addition to a more dedicated and specific parental encouragement, is long overdue it would seem. As the research has suggested, childrens’ lives have become more crowded with other activities, and it seems that parents are putting too much emphasis on a number of activities to try and make their children more “well-rounded”, instead of having their children focus on fewer, but more educationally beneficial, pursuits.

It would appear there is more truth in the old proverb  “Jack of all trades, master of none.”, than parents care to realize. Whilst “well-rounded” children are deemed highly desirable by schools when selecting new intake, and subsequently during the application process for university admissions, finding a healthy balance is also crucial.

Schools across Britain are reporting that students who sat GCSEs in English have been ‘harshly marked down’, as a result of this year’s GCSE A*-C results falling for the first time in the exam’s history. One headteacher has condemned the GCSE exam board as being ‘unfair’, and claims that her ‘pupils have had their life chances damaged’.

The Secretary of State for Education, Michael Gove, has always alleged that the value of GCSEs and A-levels has been corroded by the “dumbing down” of exams, and the over-generous awarding of grades.

The question is, have standards genuinely fallen, or were this year’s GCSE exams particularly harsh?

There has been much speculation in previous years about exam standards becoming progressively easier. It always seemed difficult to believe that Britain’s teenagers were getting increasingly more intelligent every single year, particularly as there have been conflicting reports suggesting that literacy standards have been falling in Britain since 2005.

Although it is considered “cool” for teenagers to type in “text talk”, what implications might this have upon literacy standards – if at all? Arguably, if one is not reading quality literature, or writing at a high standard on a regular basis, it is very easy to fall into a situation where spelling standards decline, and writing standards do not progress as quickly. I do not suppose the US English spelling, which is so commonplace on the internet, helps terribly much, either.

Furthermore, consider the poor quality of writing in the ‘Twilight’ series of books, which are ever so popular with today’s teenagers. When teenagers are familiarising themselves with the following examples of syntactical car-crashes, colloquialisms, and appalling overuse of adjectives, would it really surprise us if we discovered that English standards are falling?

“He leaned in slowly, the beeping noise accelerated wildly before his lips even touched me. But when they did, though with the most gentle of pressure, the beeping stopped altogether.”

“Time passes. Even when it seems impossible. Even when each tick of the second hand aches like the pulse of blood behind a bruise. It passes unevenly in strange lurches and dragging lulls, but pass it does. Even for me.”

“He lay perfectly still in the grass, his shirt open over his sculpted, incandescent chest, his scintillating arms bare.”

“He was both dazzling and dazzled.”

Perhaps incorporating the study of one of the ‘Twilight’ books into the National Curriculum would not be such a bad idea; not because the books are an example of quality writing, but because they are actually very good examples of a poor writing style that teenagers should be taught not to emulate in their own writing. As some of the more “eloquent” teenagers are already reading the books recreationally, why not use ‘Twilight’ as an opportunity to educate teenagers in what not to do, in a manner that will actually be enjoyable for most of them, and will thus be easier for them to relate with. Moreover, although somewhat off the topic of English studies, the ‘Twilight books might also be a useful learning text for PSE (Personal and Social Education) classes, as the ‘Twilight’ books also send out the wrong message about relationships. For example, the main character, Bella, abandons a number of things (school, her relationships with others) in order to allow her entire existence to be engrossed in her adoration for Edward, resulting in an underlying message that almost makes it seem “cool” for a girl to allow herself to be defined by a boy she obsesses over. Maybe it would be a good idea to let teenagers realise how destructive such a mindset could be.

Back to the topic of English, the following examples discovered on Twitter may just about sum up the general standard of some teenagers’ literacy:

A tweet posted by @AngryBritain, which commented on the TV programme, ‘X-Factor, lead to the angry response of a teenager who, it would appear, was previously uninformed as to the definition of the word “snigger”. She was, therefore, under the false impression that the tweet read the word “nigger”, instead of ‘snigger’.

Something tells me she may have been right about that…

I rest my case.

Just a quick glance at the Facebook page or Twitter feed of today’s modern teenagers gives us an insight into today’s standard of English literacy. “Y do teenz lyk 2 typ lyk dis”? Alas, I do not think the elder generations will ever really understand the trend.

Maybe “dis way of writin” could actually be considered more scholarly than we care to believe. Perhaps the English language is merely reverting back to Old English or Frisian! Fashions do, after all, repeat themselves, and maybe the same is beginning to happen with regards the English language.

Just a moment ago, I was reading an old book that I stumbled across: ‘The Cambridge History of the English Language: (Vol 1): the Beginnings to 1066’ by Richard M. Hogg, and was reminded how Frisian, a West Germanic language spoken in the province of Friesland, Netherlands, and parts of northern Germany, is the closest relative of English. In fact, Frisia was once a powerful and independent kingdom from the c.7th century, but lost its independence by the 15th century.

To summarise, Old English and Frisian were, at one time, mutually intelligible. After the Battle of Hastings, English became influenced by Norman French, whilst Frisian became influenced more by the Dutch language. Frisian is similar to English in that both languages are rich in vowels, diphthongs and triphthong; but unlike Germanic languages, have nasal vowels, similar to Afrikaans. The Frisian “r” is similar to the English alveolar “r”, as opposed to an uvular sound in German or Dutch.

An extract from ‘Beowulf’, a poem written in Old English.

I was interested to hear the languages spoken, and a search on YouTube led me to a rather interesting documentary presented by Eddie Izzard, that was previously part of a series called ‘Mongrel Nation’, once featured on The Discovery Channel. In one of episode, Eddie Izzard learnt a few Old English phrases, and subsequently took a trip to Friesland to meet a local Frisian-speaking farmer. Interestingly, Izzard asked the farmer if he could buy a cow, speaking in Old English, and the farmer understood most of the conversation. An excerpt from the series can be found here.

To understand my observation about teenagers’ “text talk” being similar to Old English or Frisian, just observe the following example:

Frisian: Ik wolde net lyk it te rein oer de neist wyk.
English: I would not like it to rain over the next week.

Also, notice how in spoken English, certain regional dialect tends to be a little sloppy by dropping letters from the ends of words. Thus, observe the following:

I am sure if teenagers realised that their style of writing/speaking  is scholarly enough to be comparable to Old English or Frisian, the latest trend of “text talk” would soon appear less “cool”, and perhaps we might gradually see it begin to fizzle out.

I am sure that would come as a relief to some of us. 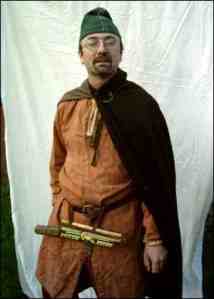 If the English language is reverting back to Old English, perhaps Old English fashion will also repeat itself? Who reckons we’ll be seeing this example of 11th century “chic” worn by today’s teenagers…? … Maybe not.