Monday 8th April saw media outlets across all continents of the world reporting on the breaking news that Margaret Thatcher had passed away; some making spectacular blunders amongst the mass media frenzy to report the news first:

The BBC reported that Margaret Thatcher had ‘died following a strike‘… How ironic that would have been. (Source: Yahoo/Twitter) 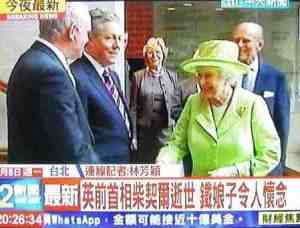 The world has seen the media depict Lady Thatcher as the ‘Greatest Prime Minister’, with relatively few reports revealing the darker side of her time in power. Labour Leader, Ed Miliband, also stood by the traditional moral of de mortuis nil nisi bonum (“Of the dead say nothing but good”), while Tony Blair condemned the street parties celebrating the death of Baroness Thatcher, and the Labour mainstream has attempted to distance itself from hardliners’ celebrations. 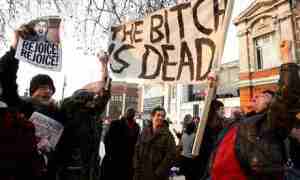 I, for one, most certainly did not rejoice at Margaret Thatcher’s passing, and I find such celebrations of her death utterly distasteful. Such celebrations bare an unappealing similarity with the media images of people dancing on the fallen statues of dictators, when Britain has no such dictatorial institutions and practices.

However, whist I do not rejoice at the demise of Thatcher, I also refuse to remain silent.

Although I had initially decided against writing this post, I ultimately decided it was time to post an honest perspective, after feeling nauseated by all the comments of those who are too afraid to be honest, and biased articles that serve no purpose other than pandering to the Right. Such re-writing of history misleads the younger generations into falsely believing Thatcher was a “strong leader”,  and a role model to follow.

Whilst one would normally be mindful of the grief of another’s family and friends, in the case of such a prominent and controversial political figure, I feel that the judgement about such an individual’s legacy should be an honest one, whether one agrees with her policies or not. Why must a person always be automatically be granted the “privilege” of every member of society suddenly respecting them, solely in virtue of their being dead?

As Glen Greenwald reported in the Guardian, “the demand for respectful silence in the wake of a public figure’s death is not just misguided but dangerous.” Greenwald pertinently states that:

“Those who admire the deceased public figure (and their politics) aren’t silent at all. They are aggressively exploiting the emotions generated by the person’s death to create hagiography… Demanding that no criticisms be voiced to counter that hagiography is to enable false history and a propagandistic whitewashing of bad acts, distortions that become quickly ossified and then endure by virtue of no opposition and the powerful emotions created by death. When a political leader dies, it is irresponsible in the extreme to demand that only praise be permitted but not criticisms.”

The fact is, Margaret Thatcher was **not** the greatest ‘Prime Minister’ at all. She was uncompassionate, uncompromising, destructive, prejudiced, and manipulative. She pressed forward policies that were primarily only of benefit to herself and those in her elite group, whilst she punished the working-classes, disregarded their human rights, and disdainfully, and famously, branded them “The enemy within”.

Ironically, she was the daughter of a greengrocer. This was a woman who came from humble roots, and who climbed the social ranks after marrying a millionaire. It was her husband who subsequently financed her political career.

Whilst I am aware that my views will be criticised by Tory supporters, Thatcherites, and those influenced by the propagandistic right-wing media spin, Thatcherism was without a doubt a national disaster.

Many areas of Britain still remain trapped by Thatcherite policies to this day. Indeed, Thatcher’s former Chancellor Geoffrey Howe once stated: “Her real triumph was to have transformed not just one party but two, so that when Labour did eventually return, the great bulk of Thatcherism was accepted as irreversible.” It is no coincidence that all three great economic crises since the Second World War have occurred since Thatcherism. Much of it has roots in the Thatcher’s free market experiment, which annihilated much of Britain’s industrial base in favour of a deregulated financial sector.

Many Thatcher supporters still claim her policies were “necessary”, and whilst I agree that coal mines would have eventually needed phasing out when other power sources became more common-place, it was not necessary to create such mass industrial closures, nor to push unemployment so high. It also was not necessary to raise interest rates so high, or to push up the value of the pound. Thatcher’s only purpose was monetarism: a superficial logic, adopted from American economist Milton Friedman, of keeping inflation low by restricting the money supply. Whilst it did not comply in the true sense of Friedman monetarism, Thatcher adopted a looser version of monetarism when the economy crashed in the early eighties, was radically successful at disregarding the unemployment it created.

Today, there is much anger about social security in Britain, which is focused on the idea that people are “scrounging” off state benefits, whilst the poor are demonised by society. The fact is, there is more unemployment in Britain today than there was 40 years ago – A consequence of Thatcherism devastating mining villages and industrial towns, thus stripping communities of millions of secure industrial jobs for skilled workers, from which Britain has never really recovered. Even when the British economy was supposedly booming, old industrial areas still had high levels of unemployment and economic inactivity.

Modern day “chav” culture has stemmed from Thatcherism. The working-class have now become today’s unemployed. With the loss of industries which provided employment, apprenticeships, and opportunities for young people, many living in working-class societies now feel they have nothing to work towards or look forward to. Many are unable to provide for their families. Many turn to drugs believing “Where there’s no hope; there’s dope”, as was suggested in this documentary on a once thriving small Welsh town that has since been crippled by Thatchersim, and the subsequent economic downturns.

It would seem no coincidence that Wales now has the highest suicide rate in the United Kingdom.

Much of modern day intolerance of working-class people has stemmed from the right-wing media spin on the Miners’ Strike and Riots that subsequently followed. Having grown up in a community devastated by Thatcherism and witnessed the destruction, I grew up hearing stories of police brutality during the Miners’ Strike of 1984-1985; stories that were never revealed by the media at the time. The nation were shown only the footage of the miners defending themselves from the police who had instigated the violence, leaving an entire nation believing the discriminatory view that the working-class are “thugs”. It lead society to believe that Thatcher’s policies were deserved and necessary.  It was, in fact, a conspiracy and an unprecedentedly savage smear campaign, and it is only in recent years that the truth has begun to emerge. Author Seumas Milne has revealed the astonishing lengths to which the government and its intelligence machine were prepared to go to destroy the power of Britain’s miners’ union. It has since been revealed that the government used bogus bank deposits, staged cash drops, and forged documents; whilst agents provocateurs, M15 and police Special Branch were set out to discredit trade unionist Athur Scargill, and other miners’ leaders. Planted tales of corruption were seized on by the media.

Although more evidence is emerging, it is now too little, too late. The damage has been done, and the working-class will never rid themselves of the images portrayed by the media and the Tory government. Even today, the supporters of Thatcherism still hail at the crippling of the trade unions that were shattered by Thatcher’s anti-union laws, crushing defeats of strikes, and mass unemployment. With no unions to stand their corner, workers’ have been left with poorer work conditions and living standards, and are often held to ransom at the mercy of their bosses.

We need only look at the banking crisis of 2008 to figure out how well that worked…!

Ian Gilmour (Dancing With Dogma (1992), p124), has revealed that the overall tax burden rose from 39 percent in 1979 to 43 percent in 1989. Gilmour also points out that Thatcher cut taxes for the wealthy (a policy we have seen repeated by David Cameron’s government), with a top rate of tax of 83% when Thatcher came to power, and only 40%, whilst the poorest were hit by VAT that was just 8% percent prior, and 15% after Thatcher gained power. Furthermore, the poorest fifth of the population accounted for around 10% of after-tax income in 1979. By 1989 their share had fallen to 7 percent, whilst the wealthiest fifth rose from 37 percent to 43 percent, thus making the wealthiest people richer, and the poorest people poorer.

The more one delves into the facts, the more evident it becomes that Thatcher was not only fighting the miners – she was, in fact, fighting an entire class of people; discriminating against the most vulnerable class, stripping them of their jobs and financial stability, and driving them into the ground, almost like a form of clandestine eugenics by the back-door.

Today, five million people have their names on social housing waiting lists, while billions of pounds of housing benefit line the pockets of private landlords, swindling people with rip-off rents. The vulnerable are often forced to live in slum housing such as sheds and garages. The scarcity of housing turns communities against each other and we are witnessing increasing racial tension as immigrants, or anyone deemed “less deserving” are scapegoated for receiving housing before a British-born national. The root of the problem lies with the Thatcherite policy which gave private landlords the right-to-buy council houses, whilst failing to replace the social housing that had been privately sold.

I have witnessed a number of people on social media turning a blind eye to the destruction I have mentioned, in an attempt to “respect the dead”; instead choosing to comment on Thatcher being the last Prime Minister to “stand for what she believed in” and that “she stood up for democracy”. It would appear that there is a major confusion, whereby many people are duped into believing that a single minded leader who is not de-railed by unpopularity, is more important than the catastrophic policies they advocate. As we have seen, standing up for what she believed in (see her famous “The Lady’s not for turning” speech), has lead Britain into a major economic crisis. Furthermore, Thatcher did not “stand up for democracy”. We need only look back to her act of racial discrimination in opposing sanctions against apartheid. She called Nelson Mandela a “terrorist”, whilst she supported the murderer and torturer Augusto Pinochet in Chile, and gave support to the Khmer Rouge in Cambodia.

As Glenda Jackson, the MP for Hampstead and Kilburn stated in her refreshingly honest parliamentary speech,  Thatcher may be “the first Prime Minister of female gender…  But a woman? Not on my terms.”

Ms Jackson delivered her speech from an almost empty Labour bench, as dozens of Labour MPs  from the constituencies most adversely affected by Thatcherism, chose not to attend as a form of protest to Thatcher’s tribute.

Today, the current Tory coalition government has picked up from where Thatcher left off, privatising the NHS, whilst thrashing state welfare – literally laughing as they did so.

Thatcher may be dead, but the aftermath of her civilization eroding policies and destruction, continues to live on.

2 thoughts on “Let’s Be Honest: Margaret Thatcher was NOT the ‘Greatest British Prime Minister’”

Please comment on this article. I would love to hear from you! Cancel reply